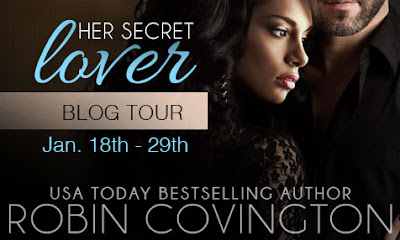 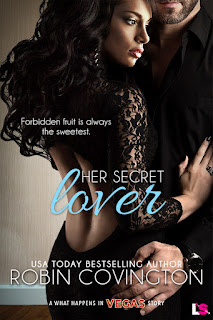 Kelsey Kyle will do whatever it takes to get into the management trainee program at the casino where she works. So when she’s given the opportunity to get a VIP customer’s endorsement for the program, she jumps at the challenge. All she needs to do is arrange a one-on-one fan experience with the woman’s favorite author, tall-dark-and-intense Micah Holmes.

An entire week at a Vegas romance readers’ convention, surrounded by hundreds of people, is Micah Holmes’ idea of hell. But one look at Kelsey, his assigned hotel concierge, and the attraction is immediate. Maybe this week won’t be so bad after all…

Anything beyond a “strictly professional” relationship will get Kelsey fired, but she needs to get close to Micah to get the super fan experience her client wants. Hot sex in her apartment pool begins a game of “undercover lover” that quickly escalates to something more. But when Micah discovers her secret agenda, all bets are off.

A USAToday bestseller, Robin Covington loves to explore the theme of fooling around and falling in love in her books. Her stories burn up the sheets... one page at a time. When she’s not writing she’s collecting tasty man candy, indulging in a little comic book geek love, and stalking Chris Evans.  Don't send chocolate... send eye candy!

Robin’s books have won the Golden Leaf Award and finaled in the Romantic Times Reviewer’s Choice, the Book Seller’s Best and the National Reader’s Choice Awards.

She lives in Maryland with her handsome husband, her two brilliant children (they get it from her, of course!), and her beloved furbabies.

Drop her a line at robin@robincovingtonromance.com - she always writes back.

“Is this a booty call? Is that your emergency?” She wanted her tone to carry more heat due to anger rather than her lust for him, but she knew she failed miserably. Deep down she didn’t care why he called her; she was glad to see him, but she wasn’t letting him off the hook so easily.

“I finished the book and all I could think about was telling you and celebrating.”

Her heart did a wonky flip in her chest as an answering flush of lust spread over her skin. Micah did it for her, and the thought that he’d chosen her when he wanted someone to tell his news was absurdly romantic in her cynical mind. She fought the urge to go all mushy on him and opted for door number two: humor and an orgasm.

“And by celebrate you mean...”  “Peeling off your clothes and making you come.”  He wasn’t even pretending to be contrite, his grin making him look wicked and boyish at the same time. It was a combination guaranteed to make her do whatever he wanted. Bastard.

She gave up even the thin pretense of being mad and laughed, pulling him closer and wrapped her arms around his waist. Micah groaned a little and resumed the kiss, this time delving in deep and wet into her mouth, kissing her until they both had to surface for air.

“I missed you,” Micah half-whispered into the space between them, and it caught her off guard, her heart thumping hard in her chest at the words. He cupped her cheek with his hand and rubbed his thumb over her bottom lip, dipping in a little for her to taste and suckle briefly.

“I missed you, too,” she breathed against his chest, grateful for not having to look him in the eye when she said it. The words had popped out of her mouth before she engaged the keep-it-casual filter.

“Good.” Micah stepped back and tugged her with him, spinning her so that he was guiding her backward into the bedroom area of the suite. He leaned in to kiss her, pushing her jacket off her shoulders, and she heard the whisper of fabric as it slid to the ground at their feet.

The bedroom area was bright with sunlight streaming through the floor-to-ceiling windows, but the heat of the day was nothing compared the fire in her belly as her desire spiked with each pass of her hands over his skin. She trailed her hands over his chest and pulled him down to her, taking his mouth this time in a kiss that communicated to Micah how much she wanted what he had to offer.

It had just been a few hours ago and she craved his touch, the way he made her feel. She knew he’d deliver on his promise to make her come, and she shivered in anticipation. His rough fingers brushing against her breast as he undid the buttons of her blouse was delicious. The cool air of the room against her exposed flesh as he tugged down the cups of her bra only increased her pleasure.

“I was writing the last scene, a sex scene, and all I could think about was tasting your nipples and you making that stuttery gasp sound.” He dragged his thumb across the tip of her right breast, and she closed her eyes on her exhale. Micah half laughed and half growled. “Yeah, fuck, that one.”

“Did you write us into a book?” she asked, shoving her hands underneath the waistband of his sweats and squeezing his ass. “Did you fuck me in your book?”

“Don’t worry, I changed your name.” Micah grinned, gently shoving Kelsey the last few steps into the bedroom. She stumbled back with a breathless laugh, pulling her blouse out her skirt and undoing the last few buttons and letting it hang open. “Even though I heard you screaming mine in my head.”