New York Times and USA Today bestselling author, Cathryn is a wife, mom, sister, daughter, and friend. She loves dogs, sunny weather, anything chocolate (she never says no to a brownie) pizza and red wine. She has two teenagers who keep her busy with their never ending activities, and a husband who is convinced he can turn her into a mixed martial arts fan. Cathryn can never find balance in her life, is always trying to find time to go to the gym, can never keep up with emails, Facebook or Twitter and tries to write page-turning books that her readers will love. 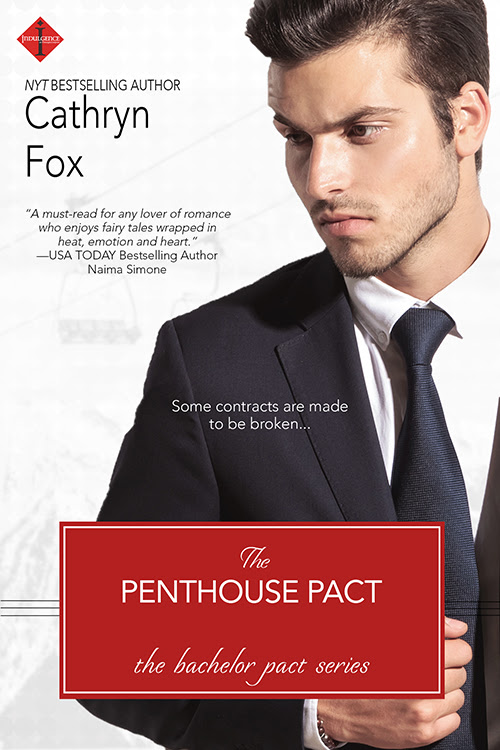 Billionaire software developer Parker Braxton knows everyone wants something from him. That's why he made a multi-million-dollar bachelor pact with his friends to never marry. But he never counted on running into, literally, the quiet but sensual Layla Fallon.

Layla isn't afraid of hard work. Still, there is no light at the end of her student-loan tunnel. When Stuck-Up Suit—Parker Braxton—accidentally runs her over, it's the last things she needs. She refuses his help, but he's persistent. He’s also handsome, kinder than she ever expected, and she’s doing her best to ignore her attraction. Which is harder than it sounds when she’s recuperating at his penthouse.
Sparks fly. Hearts flutter. But falling for Layla could cost Parker more than just several million dollars.

Sleeping beside a half naked Layla? A bolt of heat moved through him and he struggled to curb his desires, as his body grew tight. He shifted restlessly in the chair. “I don’t think that’s a very good idea.”

“It’s the only sensible thing.”

“No.” Pillow or no pillow, it wasn’t going to stop him from wanting her. A move of his hand, he’d be able to touch. A flick of his tongue, he’d be able to taste. Not going to happen. Ever determined, she squared her tiny shoulders. “Then I’ll take the chair.”

So much for the fight going out of her. Here she was giving him a hard time again…a hard…everything. “You’re the one with the concussion. You need rest.”

“So do you. You work eighteen hour days.”

How the hell did she know that? “Layla—”

“Do you really want to keep doing this?” she asked, throwing his words back at him.

“I’m not—” She pushed the blankets off and threw her legs over the side. He jumped up from his chair. “Get back in that bed.”

“Fine,” he said stomping to the other side of the room and sliding in beside her.

“Just no touching,” she said.

“And I’ll sign it.” She snuggled in next to him. “Please add: no scooping me up, lifting me to put me on the counter, or carrying me in or out of a car with stupid door handles.”

“My car is not stupid, and I did those things to help you.”

“I don’t need any help.” She shoved a pillow in between them, and gave a triumphant sigh.

“You’ve been touching me too, you know.”

“Fine, what do you want to add to the contract?”

“Nothing,” he groaned out.

She turned to him. “Nothing. You have to add something if—”

“I never said I didn’t like you touching me.”