Release Day Blitz: COMPLETE WITH HER by LYNN BURKE 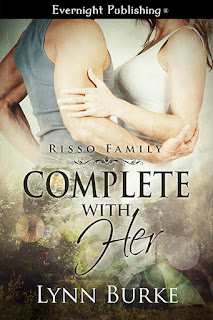 Bastian Risso breaks away from his loud, intrusive family and moves to Charleston, West Virginia. His new neighbor is a seemingly lonely soul, a kindred introvert who might be his perfect match. Her  beauty calls to him like a siren, and determined not to be a chicken- shit, he steps out of his comfort zone to make her acquaintance. Eve Thompson is protective of her privacy. She relishes her solitude as it keeps people from staring at her deformed upper lip or making fun of her speech impediment. Her persistent neighbor, however, proves a temptation too great to resist. His sincere smiles and compliments threaten to crumble the brick wall she hides behind. And his affections evoke feelings she can't control. Bastian plans to show Eve the beauty of who she is inside and out. But will his efforts break down her barriers or shatter both their fragile hearts? 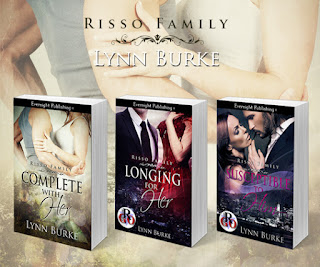 Excerpt:
Sprawling out on my borrowed sleeping bag beside the fire, I feasted my eyes on Eve as she moved with ease around our site. No fidgeting. No sidelong glances. “I can see why you love it out here.”
She tucked an escaped lock of hair behind an ear and bent over her task of wiping the blackened pot clean. “While it’s quiet at home, nothing compares to the peaceful outdoors.”
Temptation to tell her I knew of a thing or two that would compare in enjoyment rolled over me, but I refrained. Shadows lengthened across the small campground, and although we had neighbors a stone throw away, their murmuring barely reached my ears. Shrubs and trees blocked us from view, and leaning back, hands behind my head, I decided tonight, come hell or high water, I would hear Eve’s gasps, smother her moans with my lips as my hands explored her body.
Twilight hindered sight through the trees before she finished cleaning up. After hiding herself in the tent for a few minutes, she emerged with pants and clogs replacing her hiking gear. She settled onto the ground beside my knees.
I leaned up on my elbow and propped my head on my hand. “Eve.” I patted the sleeping bag I laid on. “Come up here.”
Her bottom lip sucked between her teeth as she peered at me in the growing darkness. “Why?”
“I want to kiss you.”
A gasp reached my ears, and I wished we’d brought a lantern so I could see her face. She scooted to my side, and I tugged her down to lay beside me.
Baby steps.
Inches separated our bodies, but I didn’t pull her close like I longed to do. Instead, I ran a fingertip down her cheek and neck, her pulse thrumming beneath my feather-light touch. She gazed up at me with widened eyes. Her lips parted and breathing hitched, and I held in my groan. As if my aching cock needed her encouragement.
Enjoying the tension sizzling between us, I leaned down and kissed her, and the second I swept my tongue along the seam of her lips, she moaned and shimmied closer.
Arousal rolled over me, and I clamped my arm around her waist, pressing her breasts and hips tight against me. My groan escaped into her mouth. No way in hell would I get any sleep.